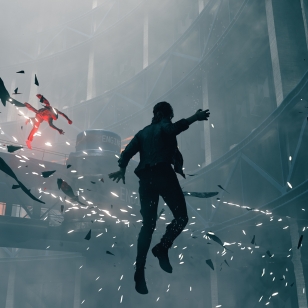 Everything takes place in the one environment, The Oldest House, but it's a "complicated, shifting" place.
There is a skill tree, and you can get the ability to throw humans. This includes living humans.
There are Audio logs, can listen to them while playing.
No multiplayer.
Length of game will depend on who's playing.
Plenty of different types of collectibles.
Ammo scarcity not a factor.
No New Game+.
There aren't multiple difficulties.
No photo mode. At least not at launch.
Automatic cover system.
Game is "not linear at all."
Remedy wish they could make a game for the Switch soon.
Flight is "more controllable" than in Anthem.
Expect the story to have a big twist.
Can upgrade weapons.
Can watch TV in the game. Visuals inspired by Kubrick. Shapes and forms mean a lot.
Not a horror game. There are horrific elements, but you can kick their ass.
There will be DLC.
No microtransactions.
Remedy wants to "squeeze as much power as possible" out of PS4 Pro and Xbox One X.
Puzzles aren't that hard, but there are a couple that are "really weird."
Klikkaa laajentaaksesi...

Control takes place in a single environment called The Oldest House, but it's a 'complicated, shifting' place.